Everyday until Christmas, I am going to try to post a picture from a past family Christmas. 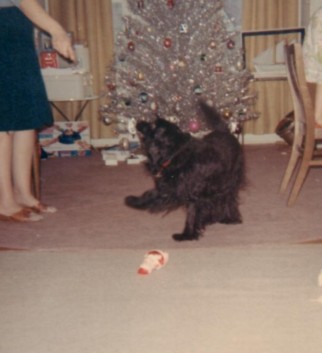 On the left is Skipper the dog I was promised when my parents had to get rid of our dog Taby mentioned in a previous post.  I got Skipper when we moved into our first house in 1953.  This is 1966 and Skipper is 13 years old.  He was part Cocker Spaniel and part Poodle.  Today he would be called a Cockapoo, but back in 1953 he was just a mutt.  Skipper lived until September of 1968 and died at age 15.  We left him shaggy with long hair, and he was all black except for some white on his chin and chest.  He some hairs that hung over his eyes.  Skipper had a rough start to life.  We had  him a short time when he became sick and was diagnosed with distemper.  The vet wanted to put him down, but my mother said, “no.”  He stayed at the vet’s for awhile and then came home but was still sick.  My mom coddled eggs for him and spoon fed him.  The vet was amazed at the progress Skipper made.  He had never had a dog live through distemper before.  At two years old Skipper was hit by car, and he had internal injuries, bruised ribs and a sore leg.  He walked with a limp for a long time.  A family friend gave Skipper lots of sympathy and she would massage Skipper’s leg.  Long after Skipper healed when ever they came over Skipper would limp to get sympathy and a massage.

On the right is a picture of Pierre our Poodle.  This is also 1966 and Pierre is one year old.  Pierre lived to ripe old age of 16.  The last few years we wondered if he was senile.  He would try to go behind the stove and get stuck.  Pierre stayed with my folks after I married.  He led a pretty quiet normal life compared to Skipper.

In the picture with Skipper the aluminum tree appears again, and those are my mother’s legs in the picture.  I don’t know what she is giving him, but he seems excited about it.

Pierre is posing on the chair like a typical Poodle.  He is in front of that fire place that was  mentioned in a previous post.

Meet Susie (left) and Brittney (right) two Golden Retrievers.  Susie and Brittney were sisters born in 1992.  Brittney was actually my brother’s dog, but lived here with us for many years so I feel as though she was mine too.  My husband and I would take them to the state park near us for walks.  I would take Susie because she was smaller and didn’t pull as hard. Brittney was bigger and heavier built.  Her coat was darker golden than Susie’s.  The first couple of years they played and played until we were worn out watching them.  Susie being smaller would get underneath Brittney and take a little nip.  Over all Brittney was the more aggressive of the two.  This picture was taken in about 1997.  Brittney died first at age 13 and Susie died a couple of years later at age 15.

We have had other dogs as well, but I don’t have pictures of them at Christmas, so I will tell their stories another time.

One thought on “Our Pets at Christmas”