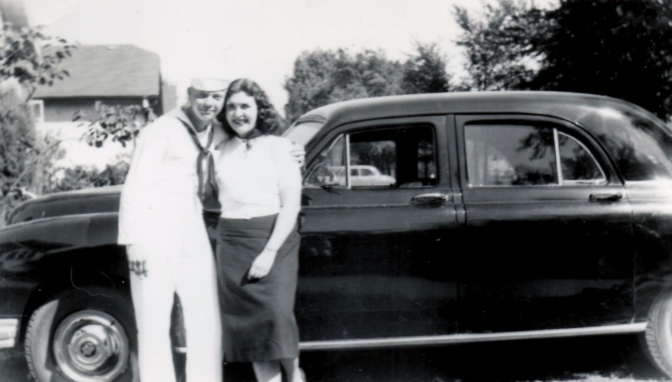 52 Ancestors in 52 Weeks topic this week is Music.  The first person to come to mind is Patricia Beck. While I wrote this, I listened to one of her recordings.  Every time I hear her voice it brings tears to my eyes.  It’s like she is still here with me.  I miss her so much! Here is my Godmother’s story.

Pat was my mother’s 1st cousin, and my 1st cousin once removed.  When I was born Pat was 14 years old and lived in Chicago with her divorced mother (my grandmother’s sister) Frances, better known to me as Aunt Fran.  We lived in a suburb of Chicago, Villa Park.  Almost every weekend Pat and Aunt Fran would come out to my grandmother’s house and spend the weekend.  I looked forward to their visits.  They always brought me some little trinket.  Pat had long hair and she would let me brush it and play beauty shop.  Pat was my idol.  She would tell me stories, sing to me, take walks with me, play games with me, and just talk with me.  In other words she paid a lot of attention to me.  She took me places too.  She would take me shopping in downtown Chicago, we would eat in nice restaurants, and she would take me to the movies.  I would spend a week during my summer vacation staying in Chicago with Pat and Aunt Fran.  One time Pat took me to Riverview (an amusement park in Chicago) with her boyfriend.  She didn’t like roller coasters, but her boyfriend did, and he took me on all the roller coasters several times.  Pat and Aunt Fran were good at organizing and holding birthday and Halloween parties.  They would buy all the decorations come out to my house, decorate, and organize the party.  The other kids loved my parties because Pat and Aunt Fran made them so much fun.

Pat had a beautiful voice and sang opera.  She would practice every morning when I was staying with her.  We would not go anywhere until she did her practicing.  She earned a B.A from the American Conservatory of Music in Chicago.  Her non-professional experience included the Lincoln Park Presbyterian Church and M. B. Sachs Amateur Hour in which she won first prize.  Her professional experience included the American Opera Company in Chicago, Board of Education Radio Station, New York City Opera, American Red Cross (Great Lakes Naval Hospital), Muni Opera in St. Louis, Pan American Council in Chicago, Decca Records – Forgive and Forget record.  She won an award at the  Chicagoland Music Festival Contest 1952 sponsored by the Chicago Tribune.  I know that Pat had won a bicycle and it was given to me.  May be it was the Chicago Tribune contest because that would have been about the time that I got the bicycle.  Pat was also fluent in several languages.  She married a man from Columbia South America and they had a daughter.    I remember one Christmas Eve she sang I’ll be home for Christmas and my father played the Organ.  No rehearsal for either of them and it was beautiful.  It brought tears to everyone’s eyes.  I wish that we had a recording of that.  Years later I asked her to sing for my husband as he had never heard her sing.  She said, “Oh, I can’t anymore, it takes practice and I haven’t kept it up.”  After my mother passed away in 1987, Pat became my go to person when I needed to talk to someone.  Pat was my Godmother, and I was her daughter’s Godmother, and her daughter is my oldest sons Godmother. Pat passed in April 2014 at age 81. For Pat’s memorial service her daughter made a CD of her mother’s singing.  She recently made a copy for us.  It’s scratchy because the recordings are old, but it is nice to be able to still hear her voice again.  She was a big part of my life, I loved her very much and she lives on in my heart.

2 thoughts on “The Singer”