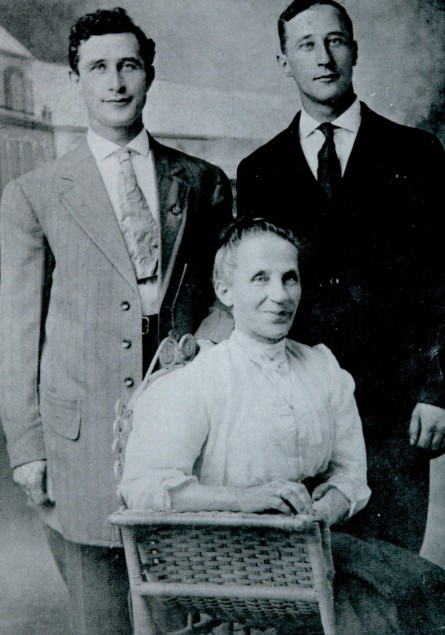 I have written a little about my Great- Grandmother Mary Fiderius, but nothing about her parents or brothers and sister.  Today I am writing about her brother’s Leonard and Joseph.

Several years ago I hit a brick wall on the Fiderius line of my family tree, and I just haven’t gotten back to it.  However, I did think of this line when I saw that this week’s theme from 52 Ancestors in 52 Weeks is Travel.  Way back in the 1990’s I worked at a library, and we received some computer Cd’s (pre-Internet) with phone books from all over the country (USA) on them.  At the reference desk, we were told to learn how to use them so we could help patrons.  I started putting in all the surnames of my ancestors.  When I got to Fiderius only three showed up in the whole country and they were in the Cleveland, Ohio area.  I knew my grandfather was born in Toledo, Ohio and Fiderius was his mother’s maiden name.  I figured they must be related, and way back then the only way to contact them was telephone or regular mail.  I was too shy to telephone so I wrote each one a letter.  I received a very nice letter from Erick Fiderius (my second cousin 1X removed).   The other two I wrote to were his father and his sister.  He told me about my great-grandmother’s brothers, Leonard and Joseph.  He also included a picture of my great-great grandmother Christina Oberdoester with her son’s Leonard and Joseph (see above).

Here is what Erick wrote on January 6, 1997 “I was delighted to receive your letter requesting information on your family lineage.  I am in fact related to your Great Grandmother Mary Beischer.  She would be my Great Aunt and sister of Joseph Fiderius, my Grandfather (about 1877 – 1970).  His brother Leonard was my Great Uncle “ Fuzzy” who must have gotten his nickname from his curly hair (see photo on left).  Fuzzy met his wife in Altoona, PA. I’m not sure but possibly your Great Grandmother Mary could have been from around that area. Both Joe and Fuzzy lived the majority of their adult life and died in the Cleveland area.  They were both very involved (held elected positions) in the early start of the local and possibly the national brotherhood of electricians, and I remember hearing stories of how they spent time (1920-1940’s?) working or wiring many of the old amusement parks of the day form Cleveland and east to NY (such as Luna Park and Euclid Beach Park).”

There was more to letter, but about other ancestors.  I found it interesting that they traveled around the country wiring amusement parks.  I wonder how many they did and where they were all located.  I have great memories of going to Riverview in Chicago.  It doesn’t sound like they made it west to Chicago to wire Riverview, but who knows maybe they did.  Since 1997, I have done more research on Leonard and Joseph and here is a short biography of each.

Leonard Adam Fiderius was born 20 October 1884 in Cleveland, Ohio to Peter Fiderius and Christine Oberdoester.[i]  Leonard married Louisa C. Wagner on 24 November 1909 in Scranton, Pennsylvania.[ii]   Leonard did travel around wiring amusement parks as Erick said in his letter.  In 1907 Leonard was the chief electrician in the construction of a Luna Park in Scranton, Pennsylvania. [iii]  Around the same time he was chief electrician for Luna Park, he purchased a moving picture theater Dreamland in Hazelton, Pennsylvania and renamed it Bijou Dream.[iv]  Two months later he is trying to sell it.[v]  In 1914 Leonard is named chief electrician for the year at Luna Park.[vi]  While I was researching Leonard, I was surprised to find this headline:  19 indicted by Cleveland Jury.  Here is a transcript of the entire article from 20 June 1914:

“Cleveland, June 20 – (AP)— Nineteen electrical construction contractors and officials of the Cleveland Electrical Workers Union were indicted by the county grand jury here today on charges of violation of the Valentine antitrust law.

The indictments charge the men entered into a conspiracy to fix prices on electrical construction jobs that they prevented competitive bidding.  The grand jury investigation followed three weeks of investigation.

Fowler is president and Kubach secretary of the Electrical Business Association, a contractors’ organization, which according to Prosecutor Ray T. Miller, conspired with the union.

Fitzgerald and Fiderius are officers of the union forced the contractors to submit to the conspiracy under threat of withdrawing labor from jobs.  The contractors allegedly were required to bid on jobs at agreed prices and to take turns bidding.”[vii]