52 Ancestors in 2 Weeks  topic this week is Black Sheep in the family.

I can’t think of any ancestors that were black sheep in the traditional sense.  I have not run across any criminals or ones that have done outrages things and been banished by family.

The closest I can come to black sheep are my grandmother, her brother, and sister.  My grandmother’s parents were divorced when she was a young child.  She grew up never knowing her father or his family.  They lived in the same small town, and she would see them from a distance.  She said the reason she never knew them was because the Bowers family thought they were better than the Reinhardt’s.  My Grandmother claimed the Bowers denied that their son, Robert, married and had children.  My grandmother told stories of how she saw her grandmother, Alexena, in the cemetery; but Alexena did not acknowledge her.  One time she saw her father walking down the street and she ran up to him and said, “I’m your daughter.”  He said, “Get away from me kid, I don’t have any children.” The Bowers were of English and Scottish descent, and the Reinhardt’s were from Germany.  Also the Bowers appear to be financially better off than the Reinhardt’s.  It also appears that the Bowers were upper class and the Reinhardt’s lower class.  Maybe the Bowers had something against Germans or maybe it was a class thing.

The story is that Robert Bowers and Eva Reinhardt ran off to Chicago to be married, however I have not been able to find a marriage record for them in Cook County Illinois.  For awhile, I wondered if they never married and that is why the Bowers denied the children were Roberts.  However after Charles Bowers died in February 1897,[1]  Robert and Eva sign a quit-claim deed over to Alexena Bowers on 26 June 1897.[2]  It lists Eva Bowers as Robert Bowers wife.[3]  Eight days earlier on 18 June 1897 Eva and Robert’s first child is born.[4]   Charles bought the two lots listed on the quit-claim deed in 1882. [5] At some point he turned the lots over to Robert and Eva.  I am wondering if he gave them as a wedding present to Robert and Eva.   After his death and after their first child is born, the property is signed over to Alexena for $1.00.  I am speculating here, but did she insist on getting the property back because of her dislike for Eva and now their newborn child?  I never found a divorce record for Robert and Eva either.  Robert died in Chicago 4 March 1913.[6]  Eva went by Eva Bowers until she died 23 December 1941.[7]  Her death certificate lists her as Eva Bowers, widow.  I believe they were married because of the quit-claim deed and her life long use of the Bower name.  I beginning to believe that they were never officially divorced.  See Quit-Claim Deed below: 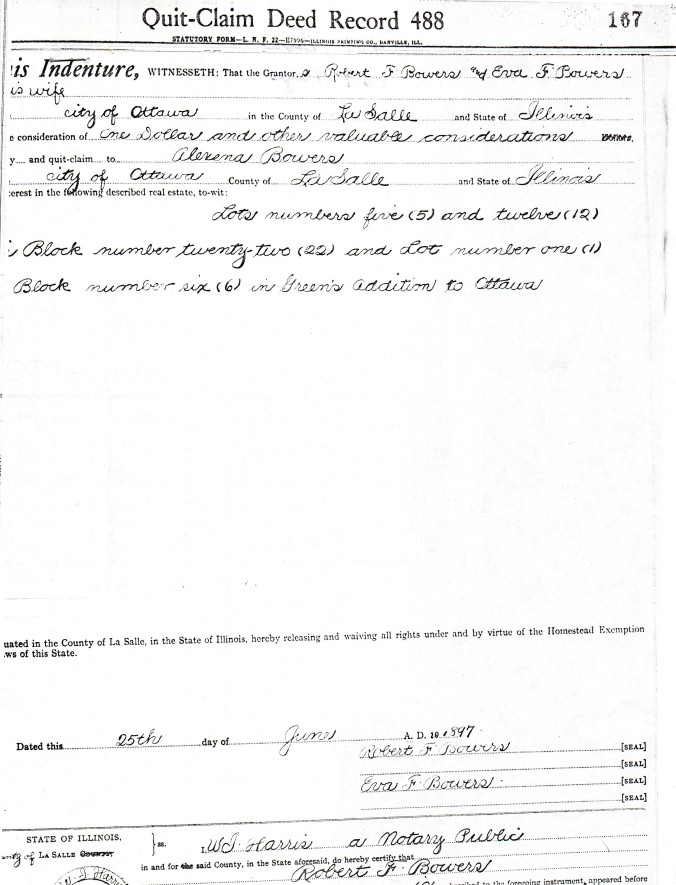 The story my grandmother told came to life for me when I read Alexena’s will.  This is proof that they did not want to acknowledge Robert’s children.  The following is a transcribed from Alexena’s will in Probate Court for proof of heirship:

On the 26th day of June 1926 R Ethel Vittum, a competent witness of lawful age produced sworn and examined on oath in open court, testified as follows, to-wit:

C. B. Chapman
Q. Your name is R. Ethelyn Vittum?
A. Yes
Q. You reside in Ottawa, Illinois?
A. Yes
Q. You are a daughter of Alexena Bowers?
A. Yes
Q. When did she die?
A. March 7, 1926
Q. Where did she die?
A. At her residence 543 Chapel Street
Q. At the time of her death was she an actual resident of the city of Ottawa, County of LaSalle, State of Illinois?
A. She was
Q. About what was her age?
A. 79 years in August
Q. She was a citizen of the United States?
A. She was
Q. Did she leave a surviving husband?
A. No
Q. What was her husband’s name?
A. Charles Bowers
Q. And about how long ago did he die?
A. I think it was about thirty years ago
Q. Was she married more than once?
A. No
Q. How many Children were born of the marriage?
A. Five
Q. What were their names?
A. Richard L. Bowers, Elizabeth A. Bowers, Robert F. Bowers, Genevieve L. Bowers, myself.
Q. R. Ethel Bowers is yourself?
A. Yes
Q. And you are residing in Ottawa, Illinois?
A. Yes
Q. Is R. L. Bowers living?
A. He is
Q. And he is living in Ottawa, Illinois?
A. In Ottawa
Q. And Elizabeth Ann Bowers is living in Ottawa?
A. Yes
Q. Is Richard Bowers living?
A. Richard and R. L. are one and the same.  You mean Robert?
Q. Robert, I should say.
A. He is dead
Q. About how long ago did he die?
A. 13 years ago, I think.
Q. And was he married?
A. I don’t know, Mr. Chapman
Q. You haven’t any knowledge so that you could testify as to whether or not he was ever married?
A. No.
Q. Do you know whether or not there are living any persons who claim to be his children?
A. There was a few years ago.
Q. And do you know there names or the names that they go by?
A. I don’t think of the name, Mr. Chapman.
Q. Let me refresh your recollection.  Do you remember whether the persons who claim to be his children are Ralph Bowers?
A. Yes Ralph is one
Q. And Helen Kaiser?
A. I don’t know the Kaiser, but I know a Helen.
Q. Helen claimed to be Helen Bowers and you don’t know whether she is now married and whether her name is Kaiser.
A. No
Q. And Frances Bowers, who also claimed –
A. I think so.
Q. And do know that she is now married and her present name is Beck?
A. I don’t know.
Q.  Were there any other parties than Ralph, Helen and Frances that claimed to be children of Robert?
A. I don’t know of any others.
Q.  Never heard of any others?
A. Never.
Q.  And in matters where the question of the heirship of Robert was raised you knew that there was proof made and these three parties were found to be children of Robert, did you?
A. Yes
Q.  And found to be the only children of Robert?
A. Yes
Q. and the other child of Alexena Bowers was what?
A. Genevieve L.
Q. And she died in infancy?
A. Yes – Oh, no –
Q. Because she was-
A. Why she died about 29 years ago.
Q. Was she ever married?
A. No.
Q. Did your mother at any time ever adopt any children?
A. No. [8]

In 1935 Ethelyn passed away[9] and in 1947 Elizabeth passed away.[10]  The only one left was Richard Bowers.  It was after the others were all gone that my grandmother got to know her Uncle Richard Lambly Bowers.  He must have been the one who gave her the pictures of the Bowers family that are now in my possession.  I have done extensive researched Charles and Alexena Bowers, and I think it would be of interest to my Grandmother to know about her father’s roots.  They seem to interest me for some reason.  What kind of people deny their own grandchildren?   By the way, my grandmother, her brother and sister did not receive any inheritance from her Grandmother.

Today with DNA tests it can be proved that my grandmother, her brother, and sister were indeed Robert’s children.  I had my DNA test done and it is a match with fourth cousins that descend from one of Charles Bowers brothers.

One thought on “Black Sheep?”

My Descendant's Ancestors is now Heart of the Family
IMPREINT journal