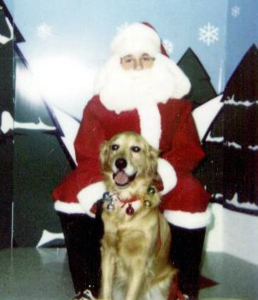 In late November of 1992 we brought, Susie, our six weeks old Golden Retriever home.  She was so little and smaller than our rabbit.  There were two females in the litter, and since we had a hard time making a choice between them, I bought them both.  We kept the runt of the litter and gave the other one to my brother for a Christmas present.   As puppies, Susie and Brittney (my brother’s puppy) would play and wrestle around until we were worn out watching them.  Susie was smaller than Brittney and would get her head under Brittney and then take a little nip.  Susie grew fast and as she got bigger the faster she could run.  We started out leaving her loose in the yard and showing her where the yard ended.  But she would have none of that, and her long legs carried her right out of the yard.  The more we chased after her, the more she would run.  We even got one of those invisible electric fences, but that didn’t stop her, she would yip as she went through it and keep going.  We finally got a 30 foot leash and would chain her outside.  The 30 foot diameter she had out in our yard became her domain.  The grass grew better out in that area evidently from her fertilizer.  The chipmunks knew not to dig their holes in her area and stayed just outside her domain.  She loved to bark and barked at everything in sight.  We believe that she heard her echo and thought it was another dog.  She could spot a squirrel a long way off.  When someone would go out the door, she knew where to stand and how to time it so that when the door opened out she would bolt.  She thought she should sleep in bed with us.  She watched TV with us and I mean she really watched TV.  She would sit in front of it and watch it with her head moving back and forth with the action.  One Christmas we bought a video camera, and we taped our family Christmas.  After my brother left with Brittney, I put on the tape of our Christmas to watch.  Susie heard my brother’s voice and ran to the TV.   She watched him move across the screen and out of sight, but could still hear his voice.  She ran around the room looking for him including looking behind the TV.  She was our constant companion, and we would take her on camping trips and for long walks in the woods.

When Susie was around 13 years old she started having trouble with her back legs and hips.  We had to help her in and out of the car.  Sometimes she had a hard time standing up on a tile floor, and we would have to help her.  Even a couple of stairs became difficult for her to navigate.  She still went camping and we would lift into the car and in and out of the trailer.

On March 22, 2008 Susie hips and legs gave out for the last time, and she could not get up even with our help.  We knew that the time had come for us to make that very difficult decision. We took her to the vets for the final time. When they had her ready, we went into the examining room.  They brought her in on the stretcher and placed it on the floor.  We got down on the floor and talked to her and pet her.  She did not attempt to get up or move.  She just seemed resigned that this was the end.  After a few minutes, we told the vet we were ready and she gave her the shot.  She went very peacefully.  She put her head down on her front paw and she was gone. There is no doubt that Susie was loved, loved so much that we would do anything to keep her alive.  I think she had a good life and lived longer than most Golden Retrievers.  When a pet is in your life for 15 years they become a big part of the family and leave a big void when they are gone. I will never forget her and there will always be a very special place in my heart for her.  A week after she died, we picked up her ashes.  I cried in the car on the way home and held the box containing the ashes close to my heart.  It felt like we were bringing Susie home again.  We were going to bury her ashes in the back yard.  But we changed our minds and put her on our fireplace mantel.  It’s comforting to know she is there.  I hope where ever she is that she knows how much she was loved and how much she is missed.  Maybe someday we shall meet again.

Note:  Brittney died about two years before Susie.  I was with her at the end too. I loved Brittney and she holds a special place in my heart too.  I hope to meet her again someday too.

One thought on “Remembering Susie at Christmas Time”